The family is at Paradise Pier, where Marge was looking forward to riding the Ferris wheel all her life, only to find out that it is being dismantled with some of its equipment being sold. Homer purchases a dumbbell while Marge gets a tandem bicycle. When Marge wants to take the bike for a ride, she finds that Homer is a less than willing participant. She tries it on her own and falls. Realizing that his mother might actually be lonely, Bart offers to go for a ride with her. They ride into an unincorporated part of the county and come upon a small village that features a tea house. Later the tea house closes forever causing Bart to invite his mother to his treehouse for tea. Marge redecorates the treehouse and the pair goes off to get a new tea service where he gets a Krusty Teapot. Outside the store the bullies accuse Bart of being a “Momma’s Boy,” which causes Bart to rebel. Marge goes into a depression and eventually sells the bike. Feeling bad, Bart offers to compete with her in a karaoke contest. While seeing Skinner and his mother perform, Marge has visions of a terrible future for Bart and she stops the show to let Bart know that he shouldn’t worry about her, it’s her job to worry about him. Meanwhile at Moe’s Homer shows off the strength in one of his arms he’s gained from working with the dumbbell and Moe has an idea on how to capitalize on it. Moe takes Homer to the arm wrestling championships, where Homer readily wins, but finds that he really misses his wife. 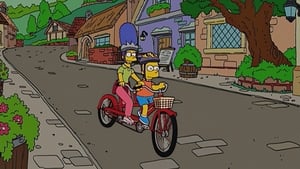 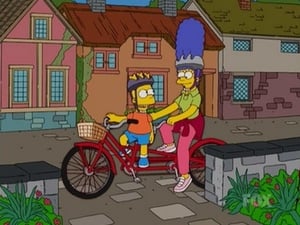