When Homer is injured at work, his compensation is use of a luxury sky box. The family enjoys the luxuries, but Lisa is bored and joins the masses rink side. She gives one of the players some score tying advice and is rewarded with Kozlov’s hockey “tree”. The stick is mounted in Lisa’s room where later that night termites break out of the stick and do much damage to the family home. Until the Russian no-wood-nick termites can be thoroughly exterminated, 6 months from now, the Simpson family is homeless. The family tries a number of options but settle upon trying out for a home where they are required to live like its 1895. They pass the audition and start living the lifestyle. When the “1895 Challenge” sinks in the ratings, the producers try to stir things up by adding Squiggy from Laverne and Shirley. When even that doesn’t work, they relocate the house to a river and watch it float downstream. Eventually the house comes to shore and falls apart. Now the family finds themselves without food and shelter as the TV crew eats away. The encounter and tribe of refugees from another reality program and together they fight to return to civilization, where they can find quality scripted television. When even that fails them, they start to entertain themselves. 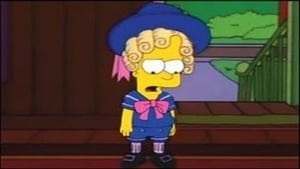