Marge sees Homer flirting with two women and later tries to decide whether he is still interested in her or not. Homer’s response is to fall asleep. Meanwhile, Bart and Milhouse are watching Krusty playing the villain “Clownface” on an episode of the old Batman television series and are inspired to recreate the carousel sequence. Marge asks Manjula what she should do about Homer and Manjula responds by taking her to a plastic surgery clinic. Marge goes in for a liposuction procedure and winds up with breast implants. The doctor gives her 48 hours to try living with them before he will take them out. At school, Bart gets Milhouse spun at a high speed on the carousel; so fast that he spins out of control, resulting in his knocking over the flagpole and throwing up on the flag. When confronted for his part in this act of unpatriotic behavior, Bart cites Krusty as the influence; making Krusty a very unpopular figure. Homer discovers her implants and at dinner the next night, Homer and the men of Springfield sing the praises of her new endowment. Marge gets offered a trade show modeling job. Marge gets into her new image until the extra weight up front of starts giving her back problems. At the trade show, Bart’s old friend Stampy and Marge’s gifts are used to help Krusty get his reputation back. Afterwards surgery is preformed to reverse Marge’s condition and the Baha Men sings the praises of her Jugs with a little help from Homer. 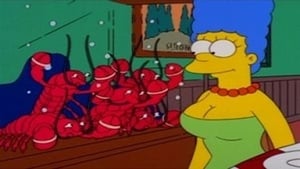