Principal Skinner introduces the students of Springfield Elementary to Declan Desmond, a documentary filmmaker. Desmond is there to do a documentary on the school. The children see an example of his work in the form of his documentary on Krusty Burger called “Do You Want Lies With That?” He starts filming his documentary by focusing on school bullies. Bart is being featured on camera for his role as a school bully, when he is humiliated by Nelson, the bigger bully. Principal Skinner tries to divert Desmond’s attention by focusing on Lisa. Desmond easily spots the ruse and gives Lisa some advice that she should pick a path and follow it. Bart searches for a way to become cool again. When Nelson shows off a hood ornament he’s stolen, Bart decides he needs to do the same, only bigger. Lisa looks for career direction and finds inspiration at an astronomy exhibit. Lisa gets Homer to buy her a telescope, only she soon discovers that light pollution from the town obscures her view. Bart tries to regain his position, as Desmond watches. He then finds Lisa is circulating a petition to reduce Springfield’s light pollution. It works and lights are put down, yes the stars have come out, but so have the criminals. Nelson and company steal more hood ornaments. Bart targets the ornate (Emmy award looking) hood ornament of Fat Tony’s car. Mayor Quimby caves into pressure from the townspeople and restores the lights of Springfield, to the point where it’s daytime at night. Bart and Milhouse were almost able to steal Fat Tony’s hood ornament, when the lights go on. 24 hours of “daylight” begin to take their toll on the townspeople. Bart is still scoping out Fat Tony’s hood ornament, he only needs the cover of darkness to pull of his crime. Since he and Lisa want the same thing, they team up to get Homer to go into power plant and overload the city’s lights. Springfield is back in the dark when the townspeople come to protest the lack of lights. Fortunately for Bart and Lisa a meteor shower begins and that distracts everyone. In the end, Declan Desmond’s documentary “American Boneheads: A Day in the Life of Springfield Elementary” is shown. 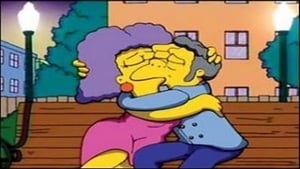