On St. Valentine’s Day Marge is too tired in participating in the lovemaking that Homer was so looking forward to. Dejected, Homer leaves the house and stumbles across a billboard for some extension courses. When he is thrown out of the “Strip for Your Wife” class led by Dr. Hibbert, he stumbles into “Successmanship 101” class. He gets the book for the class and with it he decides to change the direction of his life. Homer goes into work with a new attitude, but when he presents his ideas for improvements to Mr. Burns, they are all rejected unread. Later when Homer overhears that Mr. Burns actually has a canary named as the plant’s legal owner. With this information and some encouragement from his family Homer decides upon a plan. With Bart’s help, Homer releases the bird, which leaves the plant with no owner. In rare sign of intelligence, Homer outwits Mr. Burns and is able to take over the vacancy left by the canary. His first act in his new job is to fire Mr. Burns. Now Homer is in charge of the power plant and besides learning about the “door shutting thing” he soon learns how difficult it is to be at the top. He misses out on quality time with his family. Mr. Burns returns for a visit and shows Homer the people he missed out on being with throughout his life, Mr. Burns then tries to kill Homer by drugging him and sealing him in a tomb. He isn’t fast enough as Homer recovers and easily escapes. As a wrap up to his latest escapade Homer (and everyone) celebrate “HOMER’S 305th EVERYTHING IS BACK TO NORMAL BBQ.” 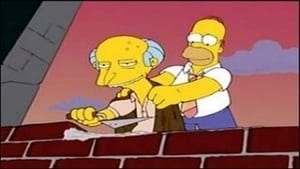