The family (along with Ned Flanders) holds a séance which brings the ghost of Maude Flanders back from the grave. With her presence in the room, she opens a book which brings us these three tales. a). “Send in the Clones” Homer finds that his new hammock is capable of making clones, and he begins making and using the clones to do all of his chores. When one of the clones permanently takes care of Flanders, Homer decides to get rid of the clones and the hammock. So he takes them both out to cornfield where he leaves them. Only the clones begin using the hammock and start to proliferate themselves at an enormous rate, soon the town of Springfield is under invasion by an army of Homer clones. It’s up to Lisa to give the army a suggestion that help them eliminate the clone problem. b). “The Right to Keep and Scare Harms” Lisa finds the grave of William Bonney who was killed by gun violence. In his memory, she starts a gun control crusade, which makes Springfield totally gun-free; even the police no longer have guns. Now defenseless, the corpse of William “Billy the Kid” Bonney and his cohorts rise from the dead and start raising havoc in town. Professor Frink develops a time machine, which Homer uses to go back to the recent past to stop the ban on guns. c). “The Island of Dr. Hibbert” The family takes a trip to “The Island of Lost Souls,” where they find Dr. Hibbert is running the island’s resort. Marge thinks that something creepy is going on there, but when she goes off to investigate she is captured by Dr. Hibbert who turns her into a cat woman. Homer goes in search of a cure for Marge’s condition and encounters Ned Flanders (who needs to be milked). Flanders takes Homer to meet the others who’ve been converted into beasts. While initially horrified at what they’ve all become, after thinking about it, he decides it might just be the life for him. 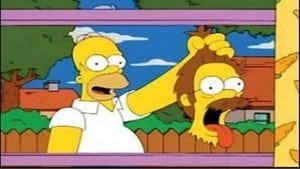