The family watches the gay pride parade and then goes to the movies. Homer loudly protests the fact that the movie hasn’t started, due to the length of ads and previews. When the ushers chase him out of the theatre, Homer runs straight into the glove of a statue of fighter, Drederick Tatum, and breaks his jaw. With his mouth wired shut and nothing else to do, Homer becomes a great listener and even a respectable member of society, which delights Marge. After his jaw has healed, Homer continues to be everything he never was before. On Afternoon YAK he promises to not revive his “weckless, weckless ways”. Weeks later Marge realizes that their life has become dull, so she enters the family car in a demolition derby and soon finds herself in trouble. In a sequence reminiscent of the “Popeye” cartoons, Homer sucks down a can of Duff and comes to her rescue. 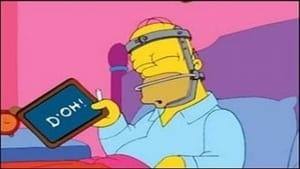