Marge falls for the image of the man on the package Burly paper towels. Homer and Bart scam Marge by making her think that Chad Sexington, the burly paper towel model, is coming to dinner. Who shows up in place of Chad? A shirtless Barney. To make up for her humiliation, Homer takes her and the family out to dinner and a show. A featured performer on the bill is Mesmerino and Homer offers himself up for hypnosis. When Homer reverts to himself at 12 years old, it triggers something within that causes him to start screaming incessantly. With the use of some Indian Memory Tea, Homer and Moe, recall when they were twelve and Homer found a dead body, which he never reported. The family journeys to the old quarry to find the body; which they do, with help from Chief Wiggum and Burly paper towels. They follow the drainage pipe back to its source, The pipe leads back to Burns’ office at the plant. He disposed of a corpse thirty years earlier. It was the corpse of Wayland Smithers… senior. He shows an old film to prove the death was accidental. Homer and Marge journey home, with Homer feeling satisfied. Moe visits them and tells about how he cracked the case. 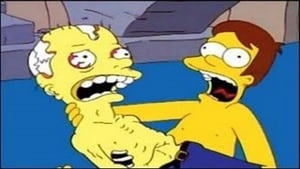