I Am Furious Yellow

Springfield Elementary finally gets a career day speaker that keeps the children’s interest. The creator of cartoon inspires the children to come up with their own cartoon characters. Bart makes an initial comic strip of “Danger Dude,” which he shows to the Comic Book Guy and Marvel Comics creator Stan Lee who happens to stop by the comic book shop, but never leaves. Their feedback leads Bart to search for other inspiration, which he finds in his own father. He makes Homer the main character in a comic that he calls “Angry Dad”. It becomes very popular and an Internet company wants to make “Angry Dad” an Internet cartoon. They offer Bart stock in return for use of his strip. “Angry Dad” becomes even more popular, but when Homer sees it at work, he goes home very angry. The citizens of Springfield, who see him in his car angry, try to make him angrier to see what he’ll do. The family realizes that Homer has anger management issues. Homer resolves to take it easy, leaving Bart without any material. Bart sets an elaborate trap to anger the now sedate Homer. Bart finds out that the Internet company has gone bankrupt and doesn’t need his new material, just as Homer takes the bait for the trap. Homer gets green with anger, a la The Incredible Hulk and it turns out Bart has saved Homer’s life; since the pent up rage would have killed him. 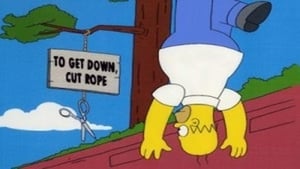