Marge plants her own garden and when the crows arrive she puts up a scarecrow. Homer himself is scared by the scarecrow, so he sneaks upon it and destroys it. As a result, the crows look up to him as their leader. The crows hang out with him wherever he goes. The crows eventually overstay their welcome and Homer tries to shoo them away, the respond by attacking him. At the hospital, when Homer asks Dr. Hibbert what can be done for the pain in his eyes Dr. Hibbert prescribes medical marijuana. Homer starts getting legally high. At one point, in his high state of mind, Homer allows Flanders to read the entire bible to him. Flanders is also gets Homer’s signature on a petition to get a ban on medical marijuana added to the next election’s ballot. Being high at work also does a wonder for his career at the power plant, because when Homer laughs at all of Mr. Burn’s jokes he is given a promotion to executive vice-president. Homer finds out about the ban being added to the ballot and a rally is organized in protest. The band Phish appears at the rally, but the attendees “have spaced on the date”, they held their rally one day after the election; so medical marijuana has been banned. The medical marijuana is burned. Homer’s medical condition was long since cured, Homer promises to never to smoke pot again. Mr. Burns calls Homer into help with his speech. Mr. Burns need to raise $60 million to appease his investors. Homer tries, but Smithers needs the use of Homer’s last joint to think any of Mr. Burn’s speech is funny. When Mr. Burns appears to dead from drowning in his bathtub, Smithers and Homer turn him into a marionette so that he can still appear before the investors. A dance performance by the strung up Mr. Burns gets his heart started again and he has recovered well enough to learn that the investors were distracted enough to not worry about the $60 million. 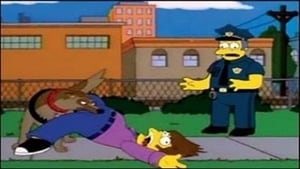